Explaining the Bradford Report's function, how it is calculated and detailing its layout

Note: The following is a sample Bradford Report;

What is the Bradford Factor?
The Bradford Factor/Score is used in human resource management as a way of measuring employee absences and the disruption they cause to one's business. After extensive research carried out in Bradford University School of Management in the 1980's, it was theorised that shorter yet more frequent and unplanned absences from work were actually more disruptive to the running of a business than longer absences.

How is the Bradford Factor Calculated?
Bradford factor scores are based on the frequency and length of an employee’s absence during a defined period, usually 52 weeks.

What is a 'good' or 'bad' Bradford Factor Score?
The higher the Score an employee gets from the Bradford Score, the more disruptive their absences have been for the business.

For example in the sample report, Simon Adams and Pauly Shaughnessy both have 3 days absent. Simon was absent on 2 occasions (once for 1 day and once for 2 days) while Pauly was absent on 3 occasions for 1 day each time. Pauly's Bradford Score is higher than Simon's due to the fact he was absent for more "spells"/occasions.

For example, employees with serious illnesses may receive high Scores that are beyond control. Similarly employees may be absent to care for dependents.

The Bradford Report is a great tool to investigate disruptions in ones business however it has its flaws. A human perspective should always be used to review high scores.

Layout of the Bradford Report

The Bradford Report can only be exported as a CSV file. After first opeining the
report it will look like this: 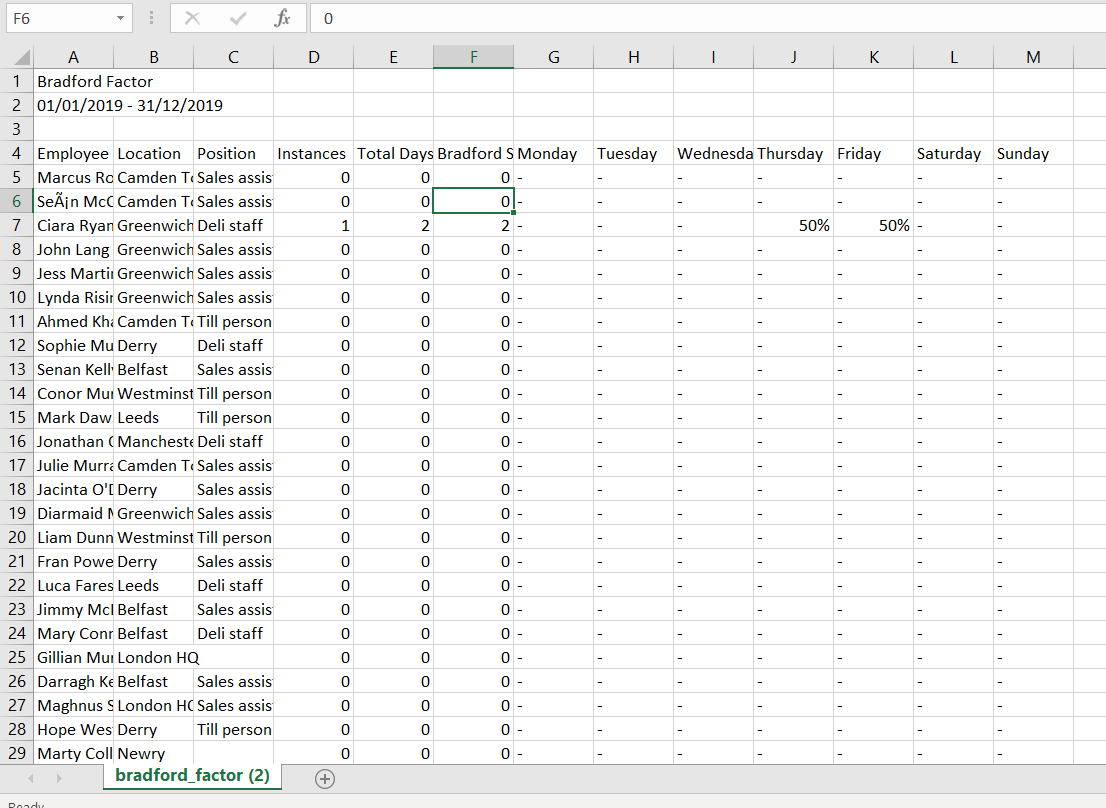 In the top right hand corner, the name of the report and the dates for which the reports parameters have been set as are displayed for your reference.

In the three right hand columns, the personal information of the employee is displayed. This includes their Name, Primary Location, and Primary Position.

The next two columns display the Instances or "Spells" and Total Days absent for the corresponding employees. This information is used to calculate the Bradford Score (as explained in the article; Explaining the Bradford Report). This figure is displayed in the next column over.

Finally the subsequent columns show which days composed the majority of an employees absences (Percentages are used to convey this).

For example Simon Adams was absent for 3 days in total. Under Monday, the figure "67%" is shown. This means that 67% or 2-out-of-3 of his absences were on a Monday.